Why Black Friday is a Busy Day for Plumbers: How to Avoid Wreaking Havok on your Pipes

Everyone loves Thanksgiving! Everyone and everything minus your pipes….and turkeys!  But really, who doesn’t like Thanksgiving?  It’s one of the few times of the year to get all your family and friends into one place.  The one time of year that there is WAY too much food to go around and overeating is expected.  I’m not telling you anything new.  It is also the one time of year that is one the the busiest times for plumbers!  The day after Thanksgiving.  Why you ask?!  Too much of all those good things can really take a toll on your pipes and it’s all preventable.  Let us tell you how we can save you $$$ and let you enjoy your Black Friday shopping!

Whether it’s just overnight, a week long, or just Thanksgiving day.  This means WAY more showers and WAY more flushes.  This might not be the biggest culprit, but it’s the combination of all of that water trying to move through your pipes with stuff that shouldn’t be in your pipes from the beginning.  This could be too much toilet paper for that new potty trainer, cotton balls, “flushable” wipes (don’t believe the writing on the package!).  It’s also so much fun for that 2 year old to watch colorful items swirl down the toilet (use your imagination).  This could also be food, yes I said it.  Do you remember when you were a little kid and you were expected to eat what was on your plate.   Maybe that food got put in your napkin and you “had to go to the bathroom.”  Just one of many scenarios.  One more thing about food in the toilet.  If you don’t have a garbage disposal, IT IS NOT A GOOD IDEA TO FLUSH IT….I  REPEAT, DO NOT FLUSH!  I know this seems like common knowledge to most people, but you would be surprised what people have put in toilets.  All this stuff is a heart attack for your pipes in your house just waiting to happen, so keep it to human waste and toilet paper.  Now for the good stuff, the food!

Of course, all this amazing  food  being consumed in your belly equals way more flushing than normal.  That is a given right? But in the kitchen, everyone always wants to help, but not everyone knows that you don’t have a garbage disposal.  All those “innocent” little things that work their way down a drain add up quickly on a day like Thanksgiving.  Make sure you put good strainers in your drains to start, which will catch most things.  Grease on the other hand will sneak down the drain effortlessly if you are not careful.  Make sure grease makes its way into the garbage can.

TOO MUCH OF THE WRONG THING IN THE GARBAGE DISPOSAL!

My husband and owner of Modern Plumbing and Heating, Raun, hates garbage disposals, unlike us ladies that LOVE t 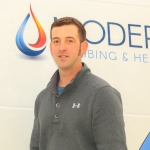 hem!  For one reason and one reason only is he not a fan.  People don’t know how to use them properly and better yet, they don’t know what they can’t or shouldn’t put down them.  At one time in my life as a young women living on my own, if it could chop it and water kept going down, we were all good!  Not a good rule come to find out!  Here’s a list of foods that can destroy your disposal and pipes:

BONES:  They’ll just keep spinning around and around with the blades.  If you’re lucky enough to get them down, they definitely won’t make it down the drain pipes.

CELERY:  The fibrous strings tend to tangle around your disposal’s blades. This same rule applies to asparagus and corn husks.

COFFEE:  Coffee grounds are deceptive. They appear to go down easy, but really they’re going to pile up and cause a sludgy, sediment-like mess in your drain.

EGG SHELLS:  Despite what you may have heard, eggshells do not sharpen the blades.  The shells’ membrane lining and shell will create a sandlike particles, sticking to the sides of the disposal, pipe walls and wrap around the shredder, wreaking lots of havoc.

FRUIT PITS:  Have you ever tried to cut through a peach pit or avocado seed?  Enough said.

GREASE: Just think about what fat does to your own pipes…I’m pretty sure Dr. OZ did a demonstration with PVC pipes on one of those heart healthy episodes of his.  It does the same thing to those pipes in your home!

PASTA (& rice):  Spaghetti, ziti, linguine, fusilli—whatever you like to sauce up…it always expands when exposed to water, even after you’ve fully cooked it. So whether you have a garbage disposal or not, you shouldn’t dump it down the drain.  It will swell and either fill the disposal trap or cause even bigger problems in those pipes. Ditto for rice.

POTATO PEELS:  These suckers can cause a soupy mess in your disposal down the road.  Even if you think you can get away with dumping them down the drain from time to time it over time forms a thick paste. The same goes for other starchy vegetables and beans.

As you can see, TOO MUCH of anything is not good.  Do yourself a favor and make sure you don’t do these things on Thanksgiving, or ever for that matter to save yourself $$$ and instead spend that money at one of our local businesses here in the Flathead Valley during the holiday season.

We have said it before and will say it again, we love our customers but also love to save you money.  With

that said, we are here to help you with your 24/7 emergency plumbing Flathead Valley!  So give Modern Plumbing and Heating a call at 406-212-7737.  We are confident that after we service you once that we will be YOUR plumber for life.  Happy Thanksgiving!